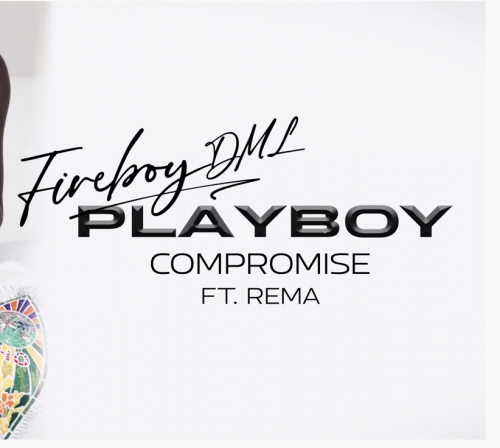 Compromise by Fireboy and Rema is a track off Fireboy DML’s new studio album titled, ‘PLAYBOY‘. The superstar on this project lets loose and learns to stop overthinking.

Fireboy DML is a Nigerian singer-songwriter whose music fuses Afropop, R&B, and soul. Dubbed the âfutureâ of Afrobeats,he burst onto the music scene early 2019 with his debut album Laughter, Tears & Goosebumps. The critically acclaimed project produced a string of stand-out singles – âJealousâ, âScatterâ which captured the attention of music fans across the globe and seamlessly brought together the artists lyrical prowess, vocal versatility and delivery.

Rema is a superstar already. Championed by no less than Barack Obama and Drake, his songs such as ‘Iron Man’ & ‘Dumebi’ have already changed the game forever. Continuously demonstrating wisdom way beyond his age, Rema is paving the way for his generation with his mission statement of taking Afrobeats around the globe.

Fireboy and Rema are two of the most talented artistes amongst the new generation. Evidently, they both have huge fans & star power. Both artists put heads together amidst the fan base clashes to bless the general music audience with COMPROMISE. Listen and Enjoy!

Victor AD - "Too Much Money"

Being rich is only sweet in Africa - Speed Darlington